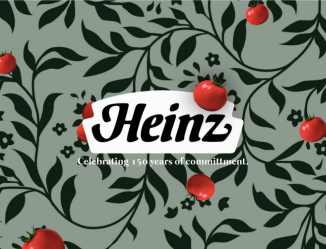 At OU, I luckily landed the opportunity as an intern for Lindsey + Asp, a PR and advertising agency.

Our final project was to make a campaign promoting the 150 years anniversary of Heinz 57. It wasn’t a rebranding, instead, it wanted us to expand on the company’s commitment. Obviously, my group of lovely women decided to skip out on overused cliches and quickly moved on to the idea of marriage.

What was a better commitment, a better promise, then the union of marriage? It’s promise that commitment will continue, and for our group, we wanted to make sure our audience knew that the commitment would last twice as long.

Fortunately, my group decided on a stop-motion video as our advertising video. I was overjoyed, one of my guilty pleasures is to watch countless homemade stop motion on Youtube, and I knew my portfolio would thank me later.

I agreed to take the video as my project, and we came up with the idea as “Heinz: A Secret Recipe.”

I bought buttons, googly eyes, blue yarn, a pot and wooden spoon. I was invested in this film. I stood in the ketchup aisle and tried to decide which bottle size of Heinz 57 would be most aesthetically appealing to our audience.

Then, making the stop-motion video came around.

I decided on using my iPhone to create the film, and used the free Stop-Motion app from the Apple store.

The most important part of stop-motion is finding a way to stabilize the camera being used. For me, this came in the from of a pound of duct tape, endless prayers, and the will to never quit.

I duct-taped my phone to the surface of a wall and I filmed my stop-motion video within the confines of three hours. The end product was a minute and thirty seconds long, but to me, it was well worth it.

Enjoy this rather ambiguous blog where I come off just a bit too pretentious, but eventually win you over with my lopsided smile and sometimes-witty commentary on my fairly-average life.

Life update: i tricked a man into selling his soul to me, purchased my first pair of Doc Martens, experienced Strep Throat, discovered I truly enjoy Chuy’s as a respectable restaurant, and spent the last seven months as a resident advisor.
Blog post #4: Writing is the Best Worst Thing to Happen to Me. I finally got around to rambling about my unexpected hiatus. But i promise i am back, and somewhat better than before. Link in bio! https://spelledlikecarry.com/2018/06/25/writing-is-the-best-worst-thing-that-happened-to-me/ #okiewriter #teenwriter #teenblog #collegeblog #writer #girlwriter #spelledlikecarry
It’s been over a month since I’ve been on here, but I️ believe I️ went through incredible character development in the past four weeks. I️ spent most of the break working day and night at my hometown coffee shop, and when I️ wasn’t there, I️ could be found alien hunting, sleeping, writing, or painting. I️ relearned my town this past month as an official has-been. I️ wrote poetry that wasn’t completely awful. I️ read three whole books. I️ was surrounded by people I️ love and people who love me, too. #blog #wordpressblog #blogger #oklahomablogger #okieblogger #collegeblog #tiredgirl #semester1 #christmasbreak #spelledlikecarry #blonde #newyear #teenblog #teenblogger
One last post before #deadweek begins, my friends. Pray for me, seriously. This girl needs a 4.0 or I’ll legitimately go into a year long depression. Also, your girl painted a Christmas window and visited old friends during Thanksgiving break. Last night’s full moon was also cool, if you managed to look up in the sky. • #blog #wordpressblogger #collegeblogger #teenblogger #teenageblogger #oklahoma #oklahomablogger #wondercitycoffee #painter #art #christmas #thanksgiving #blogger
Lately, it’s been strange on campus. I️ have become a hermit and hardly talk to anyone. This is what happened when I️ crawled out of my dorm and faced the daylight. • #blogger #wordpressblog #blog #teenblog #collegeblog #livinlavidaloca #ithinkimgoingtofailsevenofmythreeclasses #whatisthisigeven #oklahomablogger #okieblogger #plsfollow #donuts #extremelylactoseintolerant
It’s been a blur of a month, but here’s a spam of what I’ve been up to. Which has been stress-eating, ignoring moisturizer, and appreciating local art on campus. (See photo 9). Mid-terms murdered my soul, I’ve been listening to Raleigh Ritchie on repeat for the past week, and I’m still costumeless. #letsgetspooky #teenwriter #collegeblogger #teenblogger #wordpress #wordpressblogger #midterms #blog #collegelife
%d bloggers like this: